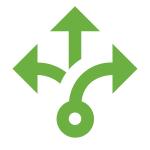 Task 1.1. Assessment of exposure routes of amphibians and reptiles to pesticides

Amphibians and reptiles may become exposed to pesticides after their intended uses by different routes, either in the aquatic or terrestrial environment. Current pesticide ERA does not consider the integration of different routes to estimate exposure levels, as organisms usually assessed are assumed to be mostly exposed through a single route (e.g. dietary in birds or mammals, waterborne in fish). It becomes necessary to determine the relative importance of different exposure routes for the integrated toxicity outcome, including ingestion or dermal uptake of contaminants in the water, sediment or contaminated substrates, consumption of contaminated prey, overspray and inhalation. For amphibians, assessing exposure from multiple routes is particularly important because of their life cycle including an aquatic and a terrestrial stage.

Task 1.2. Extrapolation of pesticide toxicity in amphibians and reptiles from sub-organismal level to apical effects

Toxicity assessment in ERA is based on apical effects with direct influence on individual and population growth, development, reproduction and survival. Amphibians and reptiles comprise a wide variety of organisms and life histories often involving dramatic physiological modifications during their lifetime. Depending on species, sex, age, or life stage, some molecular or physiological responses may be especially sensitive to certain substances and hence can be used as early indicators of apical effects. Also, exposure at a certain time can result in delayed effects appearing after exposure termination.

Task 1.3. Development of test methods with amphibians and reptiles

When toxicity assessment based on surrogate organisms does not allow prediction of hazards to herpetofauna, tests methods for amphibians or reptiles focusing on those aspects of toxicity assessment not currently covered will be developed and validated. A possible example would be the necessity of methods to investigate reproductive toxicity in amphibians and reptiles addressing the most sensitive endpoints and critical exposure windows in the life cycle, in order to generate valuable toxicity data for the ERA.